Tiger 🐯 Woods is currently stable and recovering from an emergency surgery to repair a “significant orthopaedic injuries to his right lower extremity” suffered in a single-car rollover crash which occurred in the early hours of yesterday on a steep roadway in a Los Angeles suburb.

Part of a statement on Woods’ official Twitter account, by Dr. Anish Mahajan of Harbor-UCLA Medical Center announced, confirmed that Woods had multiple “open fractures” to his lower right leg, and he had a rod placed in his tibia and screws and pins inserted in his foot and ankle during an emergency surgery.

Owing to a ghastly, roll over accident, where Woods needed to be extricated from his heavily damaged SUV with a “life saving jaw” following the one-vehicle crash near the border of Rolling Hills Estates and Rancho Palos Verdes, about 30 miles south of downtown Los Angeles.

Speaking on the matter, Mahajan, the chief medical officer and interim CEO at Harbor-UCLA. said “Comminuted open fractures affecting both the upper and lower portions of the tibia and fibula bones were stabilized by inserting a rod into the tibia,”

“Additional injuries to the bones of the foot and ankle were stabilized with a combination of screws and pins. Trauma to the muscle and soft-tissue of the leg required surgical release of the covering of the muscles to relieve pressure due to swelling.”

What does a comminuted open fracture mean?

It’s means the bone is broken into more than two pieces; inside the skin.

According to a statement from the hospital 🐯 Tiger Woods is “awake, responsive, and recovering in his hospital room,”

Information gathered by 9jagolf.com.ng. also stated that The vehicle of another driver, who pulled over to the side of the road to assist Woods shortly after the accident, was struck by another car coming over the hill, but there were no injuries.

In an interview with CBS during the final-round of last week’s Genesis Invitational broadcast, Woods suggested that he is yet to ramp up golf activity following his fifth back surgery and gave no timetable for his return.

On Monday, Woods filmed various outtakes and scenes for Discovery-owned GolfTV, a streaming company with which he has an endorsement deal.

GolfTV said Woods was filming on-course instruction as part of his latest series, of which actor David Spade and former NBA star Dwyane Wade posted photos with him on social media from Rolling Hills Country Club. GolfTV and Golf Digest have a collaboration in which Woods is paid to provide content for. And was also expected to show up on Tuesday before report of the ugly incident.

Reaction to the crash was widespread in the hours afterward. With most PGA player’s including Phil Mickelson ,Jack Nicklaus and many others expressing their concerns on the incident.

“Barbara and I just heard about Tiger’s accident, and like everyone else, we are deeply concerned. We want to offer him our heartfelt support and prayers at this difficult time. Please join us in wishing Tiger a successful surgery and all the best for a full recovery.” Nicklaus twitter handle stated.

Discussing the crash while he preparing for the WGC-Workday Championship in Bradenton, Florida.Justin Thomas, one of Woods’ friends on the PGA Tour,said.

“I’m sick to my stomach. You know, it hurts to see one of your — now one of my closest friends — get in an accident,” Thomas said. “Man, I just hope he’s all right. Just worry for his kids, you know. I’m sure they’re struggling.”

“On behalf of the PGA Tour and our players, Tiger is in our prayers and will have our full support as he recovers,” Monahan said in a statement.

It will take anywhere from days to several weeks to complete the investigation into Woods’ crash. Said officials in charge of the matter. 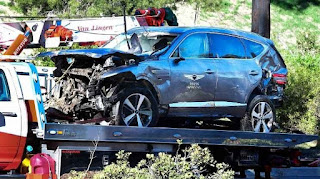 Authorities said there was no immediate evidence that Woods was under influence. They checked for odor of alcohol or other signs that he was under the influence of a substance but did not find any.

The two-lane road on which the rollover occurred curves through upscale suburbs, and the northbound side that Woods was driving on descends steeply enough that signs warn trucks to use lower gears. The speed limit is 45 mph.

According to Villanueva, Woods’ vehicle, a midsize SUV (2021 Genesis), appeared to first make contact with the median, then went across the two southbound lanes. It hit a curb, hit trees and rolled over several times, with the vehicle ultimately settling several hundred feet from the road. There were no skid marks and no evidence of braking, and weather was not a factor, per Villanueva. Authorities did not say how fast Woods was driving, and he was wearing a seat belt.

Rosani Golf losses Iconic Golfer and Member of the Club