The 20-year-old Nigerian, who had played at on the Ladies European Tour and The Sunshine Ladies Tour,missing cuts severally this season, made her first breakthrough in Beroun.

Oboh had two huge numbers on her card in the final round. Entering the final round, starting from the back-nine, she stumbled upon a double bogey at the par4 10th, birdied the 12th in what seem to look like a bounce back, unlucky for her reaching the 15 and 16th holes she made consecutive bogeys on both holes respectively, two further pars at the 17th and 18th saw her finish with a 3-over (39) at the turn before heading for the front-nine.

On the front nine she recorded another 3-over par (39), recording a birdie, two bogeys and  a double-bogey. To close shop for the round with a 6-over 78.

The Nigerian No.1 lady professional who is on a recovery path to regain her form, had rounds of 69-72-78 at Beroun, Golf course over 3days and a cumulative score of 219 representing 3-over par over 54holes of play. 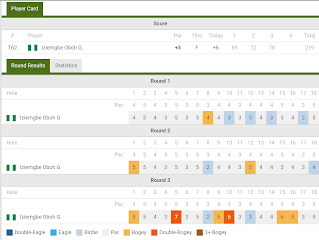 She will now move to 2021 BIG GREEN EGGS OPEN next week, more experienced and ranked 1,018 in the official world golf ranking. The tournament which is billed for the prestigious ROSENDAELSCHE GOLF CLUB,   powered by GOLF.NL and  will be held in Netherlands from   30TH JUNE – 3RD JULY 2021.

A  WIN FOR THAILAND

It was Thailands 18-year-old Atthaya Thitikul who stole the show. Winning her first ever title on the LET as a professional, after she had previously won the 2017 and 2019 Ladies European Thailand Championship as an amateur.

She shot a stunning final round of 65 to win the TIPSPORT CZECH LADIES OPEN by one stroke and secure her third LET title.

“I am so grateful for my first win outside of my country. I came close to a win on many previous tournaments, and I finally did it, it means so much to me! I am so proud to be able to represent my country. I understand my game which helped me a lot today. Nuria played some great golf this week and I know her time will come again in the future” she said after the wjn

Thitikul, began the day on eight-under-par, got off to a difficult start dropping two shots in her first four holes but bounced back with three consecutive birdies.

The teenage professional rolled in another birdie on the 9th  to make the turn in 34 and followed it up with two more birdies on the  10th and 11th holes respectively.

The Thai star did not relax there as she made three more birdies in her final four holes to set the clubhouse lead at 15-under-par, which was enough to seal the victory. Posting rounds of 68, 68, and 65 for the tournament.

Georgia Makes Cut at the 2021 Czech Ladies Open; on a wild card invitation

Tiger Woods: I don’t show up to an event unless I think I can win it. Woods says, as 2022 Masters tees off today.